The following information and chronological table are a summary of the entries from the World War One service record of Michael Joseph Nolan.

Michael Joseph Nolan enlisted early in 1915 and was allocated to the Light Horse, serving on Gallipoli where he was evacuated suffering enteritis and diarrhea. He returned to Gallipoli and his unit was withdrawn on 20 Dec 1915. Shortly afterwards he was again hospitalised, this time with a severe hernia, from which he never fully recovered, together with intermittent bouts of malaria.

Medically downgraded due to his service, he was transferred to the AIF Canteens unit and was later promoted to Corporal. He saw out the war in this role and returned to Australia in 1920.

Entitled to wear ANZAC 'A' on Shoulder Patch 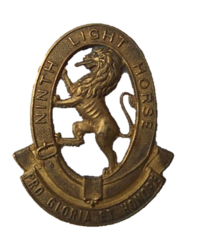 Following the outbreak of WW1, the 9th Light Horse Regiment was formed in Adelaide and trained in Melbourne between October 1914 and February 1915. Approximately three-quarters of the regiment hailed from South Australia and the other quarter from Victoria. As part of the 3rd Light Horse Brigade, it sailed from Melbourne on 11 February and arrived in Egypt on 14 March 1915.

Light Horse were considered unsuitable for the initial operations at Gallipoli, but were subsequently deployed without their horses. The 3rd Light Horse Brigade landed in late May 1915 and was attached to the New Zealand and Australian Division. The 9th was fortunate to be the reserve regiment for the Brigade’s disastrous attack on the Nek on 7 August, but the Commanding Officer, Lieutenant Colonel Albet Miel and several soldiers were killed in their reserve position. The Regiment was committed to the last phase of the August offensive battles (its sister Regiments the 8th and 10th having been decimated at the Nek), The 9th Light Horse subsequently suffered 50 per cent casualties, including its new Commanding Officer, Lieutenant Colonel Carew Reynell, attacking Hill 60 on 27 August. Exhausted and under-strength, the 9th then played a defensive role until it finally left the peninsula on 20 December 1915.

Back in Egypt, the 3rd Light Horse Brigade became part of the ANZAC Mounted Division and, in March 1916, joined the forces defending the Suez Canal from a Turkish drive across the Sinai Desert. The Turks were turned at Romani. Although it didn’t take part in the actual battle, the 9th Light Horse was involved in the advance that followed the Turks’ retreat back across the desert.

By December 1916, this advance had reached the Palestine frontier and the 9th was involved in the fighting to secure the Turkish outposts of Maghdaba (23 December) and Rafa (9 January 1917), both of which were captured at bayonet point. The next Turkish stronghold to be encountered was Gaza. The 3rd Light Horse Brigade, now part of the Imperial Mounted Division (later re-named the Australian Mounted Division), was involved in the two abortive battles to capture Gaza directly (27 March and 19 April 1917) and then the operation that ultimately led to its fall - the wide outflanking move via Beersheba that began on 31 October.

With the fall of Gaza on 7 November 1917, the Turkish position in southern Palestine collapsed. The 9th participated in the pursuit that followed and led to the capture of Jerusalem in December. The focus of British operations then moved to the Jordan Valley. In early May 1918 the 9th was involved in the Es Salt raid. It was a tactical failure but did help to convince the Turks that the next offensive would be launched across the Jordan.

Instead, the offensive was launched along the coast on 19 September 1918. The mounted forces penetrated deep into the Turkish rear areas severing roads, railways and communications links. The 9th Light Horse took part in the capture of Jenin on 20-21 September and Sasa on 29 September. It entered Damascus on 1 October, and was on the road to Homs when the Turks surrendered on 31 October. While awaiting to embark for home, the 9th Light Horse were called back to operational duty to quell the Egyptian revolt that erupted in March 1919; order was restored in little over a month. The regiment sailed for home on 10 July 1919.

It is similar in shape and description to the 1914 Star, to which few, if any, Australians were entitled.

Government issued badge in enamel
and sterling silver issued to the wife,
mother or nearest female relative of
a serving soldier. Additional bars
were suspended below for further
individuals.

Membership badge of a Kookaburra
in sterling silver, issued by the
Government to the widows of men
who lost their lives due to their
service. Numbered on the reverse.

Awarded to service personnel who
sustained a wound, or contracted
sickness of disability in the course
of the war as a result of which
they were invalided out, or to
soldiers who had retired during
the course of the war.