This image is a placeholder

The following information and chronological table are a summary of the entries from the World War Two Service Record of Osmond Albert Lewis, better known by family and friends as 'Mick'.

Although eager to enlist, his Service record demonstrates an aversion to the mundane aspects of Service life, together with bouts of Malaria and dysentery which incapacitated him for long periods.

He first enlisted underaged on 1 Jan 1941 and the enlistment document with his original Army number of NX66857 record is locatable in the National Archives but has not been digitised and it appears as if the essential elements of the two files have been merged. He was discharged from the Army on 2 May 1941 and the discharge is noted as 'NON DISCIPLINARY'.

He enlisted once more on 18 Feb 1942, still under the age of 21, his date of birth being 24 July 1924. That enlistment record is transcribed below after the chronological record. Oral history from the family has his enlistment surname as "Curlewis", however there is no record of this in the National Archives of Australia under that name in the records available at the time of preparation.

Although he was again discovered and was to have been discharged, it is likely that his parents agreed to approve his enlistment as the authority for discharge was cancelled. Having been absent without leave he then absconded and on 21 Jul 1943 a District Court Martial sentenced him to six month's detention.

After some two months the sentence was remitted by the commander of the 6th Division on 21 Oct 1943 and 'Mick' Lewis then underwent a month of infantry training, was transferred to the Australian Training Centre (Jungle Warfare) at Canungra and subsequently to the 2nd/6th Australian Cavalry Commando Regiment for training in the Atherton Tablelands before arriving in New Guinea on 21 Oct 1944 and being allotted to the 2nd/9th Australian Commando Squadron.

During those periods when he was not incapacitated due to illness, he took part in operations against the Japanese until 15 Aug 1945 when the war ended.

Discharged on 15 Apr 1946 due to demobilisation he attempted to rejoin the Army in early 1957 but his disciplinary record was against him and his application was declined.

FOR SPECIAL FORCES RAISED FOR SERVICE IN AUSTRALIA OR ABROAD


Use the hyperlinks or scroll down to see further information.

The 2/9th Commando Squadron was a commando unit raised by the Australian Army for service in World War II. Raised in 1944, the unit saw action late in the war against the Japanese during the Aitape–Wewak campaign taking part in number of long range patrol operations across the Torricelli Range in New Guinea before being used in an amphibious landing near Wewak in May 1945. After the war the unit was disbanded.

In January 1944, the 6th Division raised the 2/6th Cavalry (Commando) Regiment, consisting of the 2/7th and the newly raised 2/9th and 2/10th Commando Squadrons. Throughout the year, the regiment trained together on the Atherton Tablelands, Queensland, before sailing to New Guniea, to support the 6th Division's Aitape-Wewak campaign.

In October and November Australian forces began relieving the American garrison at Aitape. At the end of October The 2/9th Commando Squadron took over the American observation posts at Palauru, Kamti and Aiterap, and the commandos frequently patrolled across the Torricellis Ranges.

While in support of the 2/8th Infantry Battalion in January 1945 the 2/9th patrolled the hills south of the Danmap River and made contact with the 2/7th Squadron at Walum. Thereafter the commandos crossed the Torricelli Ranges and moved down its southern slopes in to the foothills. The regiment as a whole was particularly active at this time patrolling the many villages in the area. At the end of February the 2/9th was placed under the command of the 2/3rd Machine Gun Battalion, and together they cleared the Japanese from Anumb and maintained posts at Walum, Aboama and Malin. In March the commandos and a company from the machine gunners advanced to Arohemi. After six days of fighting, on 9 March, Arohemi was captured with the Australians having cleared the Japanese west of the Anumb River. With Arohemi's capture the commandos returned to Aitape for a rest.

In May the 2/9th was once again in the forefront of operations, when the regiment made an amphibious landing at Dove Bay, east of Wewak, as part of Farida Force. The 2/9th and 2/10th come ashore in the first waves to establish the beachhead. The 2/10th was given the task of defending the perimeter, while the next day the 2/9th patrolled west along the coast towards Mandi.

Later in May and into June, the regiment was attached to the 19th Brigade, which was responsible for the area between Wewak and Mandi, and defended the Mandi-Brandi area. The regiment's task was to hold the Brandi Plantation and the cross roads at Mandi.

Thereafter the 2/9th had a comparatively quiet time. After the war it returned to Australia at the end the year and the 2/9th Commando Squadron was subsequently disbanded.

The 1939-45 Star is awarded to Australian Civilian Personnel who served afloat with the United States Army Small Ships Section between 8 December 1941 and 2 September 1945. Eligibility is the same as that for Merchant Navy personnel. See required evidence to support a claim.

The six–pointed star is yellow copper zinc alloy. The obverse has a central design of the Royal and Imperial cypher, surmounted by a crown. The cypher is surrounded by a circlet containing the words ‘The 1939-45 Star’.

Stars issued to Australian personnel have recipient names engraved on the plain reverse.

The ‘BATTLE OF BRITAIN’ clasp was awarded to eligible air crew involved in the Battle of Britain.

The ‘BOMBER COMMAND’ clasp was introduced in 2012 and is awarded to eligible Bomber Command aircrew.

When the ribbon is worn alone the standard silver rosette ribbon emblem is worn to denote the award of a clasp. The silver rosette emblem is not supplied by the Directorate of Honours and Awards.

The Pacific Star is awarded for entry into operational service in the Pacific Theatre of Operations between 8 December 1941 and 2 September 1945.

Navy and Merchant Navy personnel are eligible if the 1939-45 Star is earned by six months service or if they entered the Pacific Theatre between 2 March 1945 and 2 September 1945.

The Pacific Star is awarded to Australian Civilian Personnel who served afloat with the United States Army Small Ships Section. Eligibility is the same as that for Merchant Navy personnel. See required evidence to support a claim.

The six–pointed star is yellow copper zinc alloy. The obverse has a central design of the Royal and Imperial cypher, surmounted by a crown. The cypher is surrounded by a circlet containing the words ‘The Pacific Star’.

Stars issued to Australian personnel have recipient names engraved on the plain reverse.

The Burma clasp was issued for the Pacific Star.

When the ribbon is worn alone a silver rosette ribbon emblem is worn to denote the award of a clasp.

The medal is cupro-nickel with the crowned effigy of King George VI on the obverse.

The reverse has a lion standing on a double-headed dragon. The top of the reverse shows the dates 1939 and 1945.

The rim is plain, and the medal hangs from a suspender. The ribbon colours of red, white and blue represent the colours of the Union Flag.

The War Medal 1939-45 was awarded for 28 days full-time service in the Armed Forces between 3 September 1939 and 2 September 1945. Operational and non-operational service may be counted, providing that it was of 28 days or more duration.

In the Merchant Navy there is a requirement that the 28 days should have been served at sea.

A member qualifies for the award where service was brought to an end by death, wounds or other disabilities due to service or by cessation of hostilities on 2 September 1945.

The War Medal 1939-45 is awarded to Australian Civilian Personnel who served afloat with the United States Army Small Ships Section between 8 December 1941 and 2 September 1945. Eligibility is the same as that for Merchant Navy personnel.

The Australia Service Medal 1939-1945 was instituted in 1949 to recognise the service of members of the Australian Armed Forces and the Australian Mercantile Marine during World War II.

The medal was originally awarded to those who served at home or overseas for at least 18 months full-time service, or three years part-time service, between 3 September 1939 and 2 September 1945. Members of the Australian Mercantile Marine must have served the qualifying time at sea.

In 1996 the qualifying time was reduced to 30 days full-time or 90 days part-time service. To be eligible for the medal a serviceman or woman must have been honourably discharged from the Australian Armed Forces.

The medal is nickel silver with the crowned effigy of King George VI on the obverse. The reverse has the Australian coat of arms, placed centrally, surrounded by the words ‘THE AUSTRALIA SERVICE MEDAL 1939-1945’.

The above information is from the Defence Honours site at http://www.defence.gov.au/Medals/Imperial/WWII/Australia-Service-Medal-1939-1945.asp, taken on 19 Jun 2019. 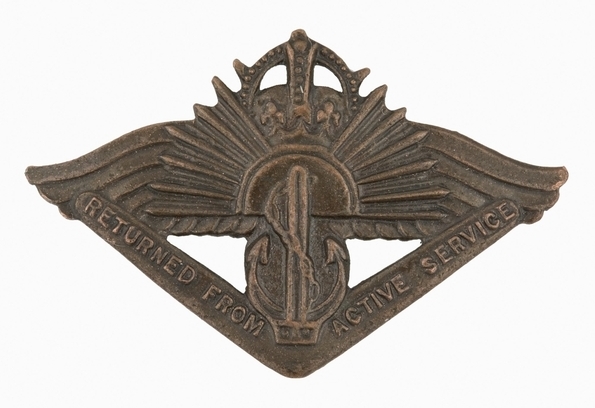 The Australian Defence Force Returned From Active Service Badge features a tri-services badge (with an anchor, wings and Rising Sun) surmounted by the King's or Queen's crown of the reigning monarch, with a boomerang underneath with the text 'RETURNED FROM ACTIVE SERVICE' . The reverse of the badge has a pair of pin clips for attachment to the wearer's clothing.

The Returned from Active Service Badge (RASB) is issued to Australian Defence Force personnel who have rendered warlike service. The badge enables individuals to display their involvement in warlike service while wearing civilian attire. It is worn when the wearing of service medals is not appropriate or possible. As the award of the RASB is not governed by statute, it has been the practice of Australian Governments to determine conditions of eligibility for each conflict in accordance with the circumstances existing at the time.

Since 1945, with the award of the Australian Active Service Medal (AASM) 1945-75 and the current AASM, the badge has been awarded automatically. The bronze badge was introduced in 1953, and is identical to the earlier post-Second World War Returned from Active Service badge, apart from the replacement of the King's crown with the Queen's crown.

Anecdotally, the positioning of the lapel buttonhole has led  Australian returned service personnel to state that "nothing is positioned above the Returned from Active Service badge".   The RASB is not worn when medals are worn, as the medals themselves are ample proof of that status.  This also applies to the miniature devices of honours and awards.